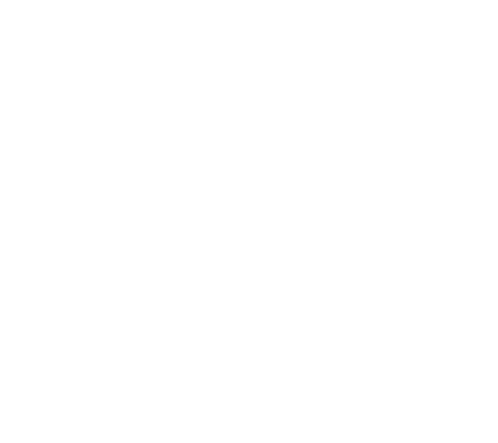 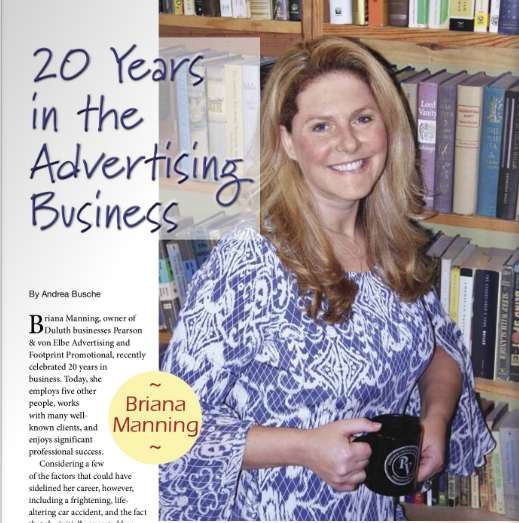 Briana Manning and the team at PVA and Footprint would like to extend a huge thank you to Duluth’s The Woman Today Magazine for featuring our very own, Briana Manning. Special thanks to Andrea Busche for the generous write-up!

20 Years in the Advertising Business

Considering a few of the factors that could have sidelined her career, however, including a frightening, life-altering car accident, and the fact that she initially operated her business out of a tiny Superior apartment, her success is even more impressive.

Her advice to other entrepreneurs is to “keep moving forward,” which is exactly what she has done — in good times and bad.

Manning was born and raised in South Range, Wis., but attended high school in Superior. She has one younger brother, Ty. Her dad was a conductor on the Burlington Northern Railroad, and her mom tended to the home and family.

From elementary through high school, Manning enjoyed competing in civic orientation contests and forensics. She was on the swim team, diving team, and ran track and cross country. She enjoyed graphic design classes and joined VICA, the Vocational Industrial Club of America.

Manning had a long-time dream of being an athletic trainer for the Green Bay Packers. While attending UW-Superior, Manning took classes with an emphasis on athletic training and sports-related injuries. She even had discussions with the Packers about starting an internship.

During this time, when Manning was working two jobs and going to school, she was involved in a horrific car accident.

“I was burning the candle at both ends,” she explained. “On a trip to Minneapolis, I fell asleep at the wheel. I was going 70 miles per hour with my car on cruise and the sunroof open, and ended up flipping my car and flying 200 feet out of my sunroof.”

Luckily for Manning, a semi-truck driver who was also an EMT had witnessed the accident. Paramedics stabilized her, and she was airlifted to Duluth with a broken neck, a compound fracture in her leg, and torn nerves in her shoulder and neck.

When Manning awoke, she was in a halo, and remained so for two months. She was sent to Polinsky Rehab to re-learn how to use the left side of her body.

The accident changed the course of Manning’s life. She decided to not pursue athletic training, as she had permanently lost a lot of physical strength on her left side.

She hadn’t considered any other career options at that point, so she focused on communications, as it seemed to be the most general. She took marketing and public relations classes and quickly became intrigued by the curriculum. She also took a radio production class.

For a time, Manning was on-air for KUWS Radio’s jazz segment. She loved it and decided to pursue a career in media.

A move to advertising

Manning took a job as an assistant media buyer with an advertising agency in Duluth. Eventually, she decided to go into business for herself, and opened a sole proprietorship, Briana Pearson Advertising. Her business did well, but Manning found it difficult to set the boundaries necessary to protect her personal time.

“I worked out of my one-bedroom apartment in Superior, and found out that wasn’t healthy for me,” Manning said. “I worked from the time I woke up until the time I went to bed. I knew that in order to maintain balance, I needed to find an office space.”

She stayed in Hermantown for 10 years, moving within the building to bigger spaces every couple of years. In 2009, she relocated downtown, to the Providence Building, where she remained for five years. In 2014, she bought her current building at 1427 London Road.

PVA handles all aspects of marketing for their clients, including media production for TV and radio, print/graphic design, website design, social and digital media, and promotional products. In 2008, Manning started Footprint Promotional Advertising, which creates customized promotional products, after she discovered that many of her PVA clients also needed these items.

“I didn’t intend for the business to take off like it did,” she said, “But shortly after we opened, we had orders from all over the country and I needed to hire more people.” Today, Footprint has clients from Duluth to Switzerland.

2010 was a difficult year for Manning. Her beloved father passed away and she got divorced.

“Even though there were many days that I didn’t want to get out of bed in the morning,” she said, “I pushed even harder, and thankfully PVA and Footprint continued to grow.”

Although Briana’s last name is now Manning, she has opted to keep her business name the same.

In February 2016, Manning began advertising on KQDS FM. On her first day in the studio, Jason Manning, co-host of the KQ Morning Show, asked her out. The couple began dating and got married in 2017.

Today, Manning is stepmother to two teenagers, Emily (19) and Colby (17). The family lives on Island Lake, and have four dogs, a cat and a horse.

“We spend as much time as possible together going to all the great new business in the area, and patronizing the ones we’ve enjoyed for years,” she said. “We love our lake life, and enjoy pontooning, kayaking and having campfires.”

Manning has served on the Boards for Second Harvest Northern Lakes Food Bank, PAVSA, and the Minnesota Ballet.

“I have always enjoyed volunteering and have been doing it for as long as I can remember,” she said.

Over the years, Manning has been nominated for several professional awards and recognitions. In 2012, she was named one of the Duluth New Tribune’s 20 under 40. Coincidentally, her husband was also recognized that year. Manning was also nominated for the Joel Labovitz Entrepreneurial Success Award three times, under the categories of emerging entrepreneur, established entrepreneur and mature entrepreneur.

With over 20 years of experience as a business owner, Manning has some words of wisdom to share.

“The best advice I can offer people is to ‘Keep moving forward.’ I have that statement on the wall in my office, and I look at it every day. It seems simple, but that phrase has helped me through the toughest of times.”

Andrea Busche is a Duluth freelance writer and frequent contributor to The Woman Today.

This website uses cookies to improve your experience while you navigate through the website. Out of these, the cookies that are categorized as necessary are stored on your browser as they are essential for the working of basic functionalities of the website. We also use third-party cookies that help us analyze and understand how you use this website. These cookies will be stored in your browser only with your consent. You also have the option to opt-out of these cookies. But opting out of some of these cookies may affect your browsing experience.
Necessary Always Enabled

Performance cookies are used to understand and analyze the key performance indexes of the website which helps in delivering a better user experience for the visitors.

Analytical cookies are used to understand how visitors interact with the website. These cookies help provide information on metrics the number of visitors, bounce rate, traffic source, etc.

Advertisement cookies are used to provide visitors with relevant ads and marketing campaigns. These cookies track visitors across websites and collect information to provide customized ads.

Other uncategorized cookies are those that are being analyzed and have not been classified into a category as yet.